Hi, Im Mel and Im one half of Gung Hoe Growers.  We have been leasing land with Katie and Hugh Finlay of 69 Danns Rd (formerly known as Mount Alexander Fruit Gardens) for nearly 5 years.  Speaking today I represent not just my voice, but that of Sas Allardice – the other half of Gung Hoe; Ant Wilson from Tellurian Fruit Gardens – a 6 acre orchard  and Tessa Sellar from Sellar Farmhouse Creamery also leasing land at 69 Danns Rd. 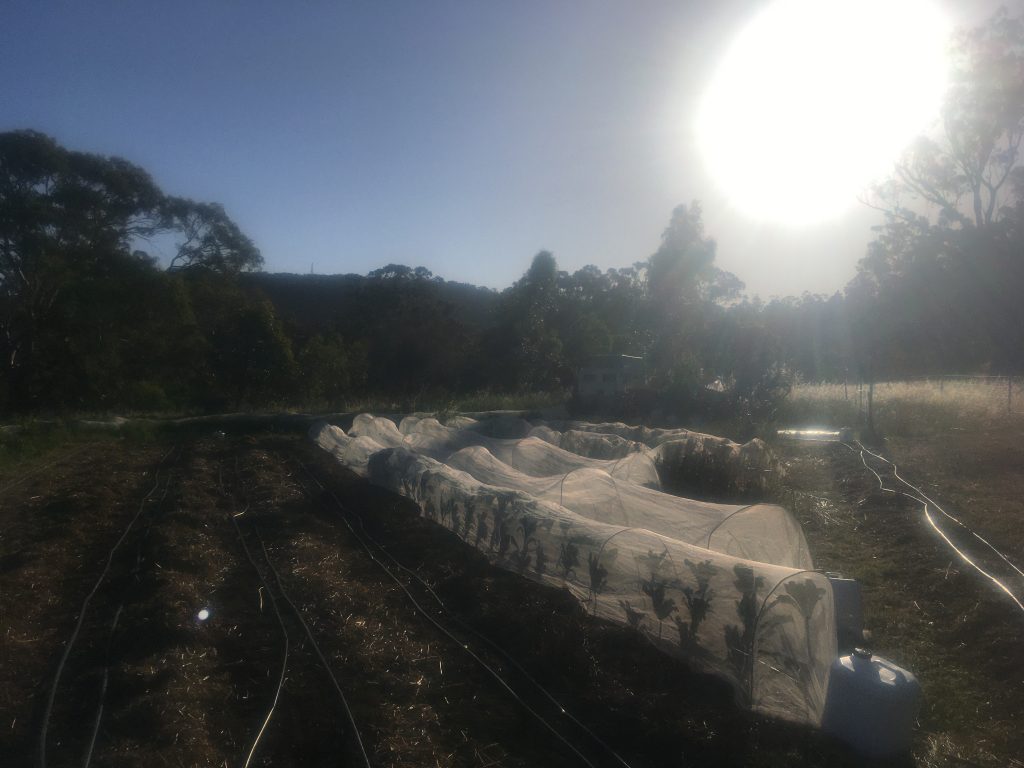 We are a small minority of young first generation farmers who want to farm but have no land.  We grow vegetables, fruit and ethically raise animals for milk in order to feed our community.  We are also part of a growing movement that chooses to farm regeneratively – and by that I mean building soil, sequestering carbon and holistically respecting the land on which we grow.

Gung Hoe Growers is also the recent recipient of the Mount Alexander  Shire  Agribusiness of the year award and holders of the 2018 Victorian Young Famers Scholarship.

Agriculture and the way it is practiced is responsible for more than half of our nations emissions.  As stated on the Department of Primary Industries and Regional Development

“Under current accounting rules, emissions generated during the manufacture and transport of agricultural inputs — such as fertilisers, herbicides, pesticides and agricultural machinery — are not counted as agricultural emissions. Emissions from the fuel used by agricultural vehicles either on-farm or in transporting produce and the fuel used to generate electricity consumed on farm is also excluded.

agricultural soils were the dominant source of nitrous oxide, accounting for 62% of total national nitrous oxide emissions.”  Thus the way in which agriculture is practiced has a major impact upon emissions released, simply through bare soil.

Farming is crucial yet not a profession held in high regard.  In terms of how council can truly support and encourage local farming in this shire we have these suggestions.  I am aware this is verbal, please feel free to contact us to expand any of these points.

You can put into place true support for local growers and financially support them to get started with subsidies on costs involved in setting up.   Reduce rates on agricultural land and pay for long term research into methods of farming and monitoring.

We ask for full disclosure of climate outlook and future water allocations – this would involve lobbying Coliban water, but in order to move forward it is necessary to know the lay of the land so to speak.  There is information that is essential to our trade that we are not privy to; being kept in the dark about such things is not going to help put food on the plate.

Support local farmers by exclusively using them for catering events.  Not only does this financially back the growers it also provides education about seasonality and access of what is grown in our climate, in our shire.

Bring back local food and cooking into the school canteens, here is a direct connection to the next generation of to their local food bowl, or currently lack of.  Imagine if we could inspire a new generation of young farmers who wanted to work on the land in a way that reduces climate change and emissions.

We suggest council could put incentives to those organisations which choose to use local food.  Not as token, but as a firm and working value.  The dream is to supply fresh, real, local food to our hospitals, prisons and schools and other public services; including  for example childcare, nursing homes and council offices.  Not only are you then supplying true nutrition you are also in the same breath supporting those workers who are on the front line of climate change and have the ability to potentially turn it around.

Having a stable demand for supply also means you are offering a space for farming to increase in the region.

People will not grow food if they are not sure there is a market – it’s pretty simple.  If people know there is an avenue to sell produce that can give them a reasonable livelihood they are more likely to transition into such a trade, despite incredibly high set up costs.  A positive example of this is how the council actively supporting the new weekly farmers market.  This is a great first step to localising food which in turn increases our shires food security and shows direction towards reducing climate impact.

Growing Abundance was a local program that sought to bring a lot of these things together – if council financially supported Community House and programs such as these they would not run on volunteer labour – but have an esteemed position within the community and an incredibly important role to play.

There needs to be empowerment around climate change action and community involvement in such programs, or exposure to local food will develop our communities ownership of what they are doing in the face of a new future.

If council is serious about climate change action think about – where does your food come from.  It is one of the most political acts you can do several times a day.  “in your lifetime you might need a solicitor once or twice, you’d need a doctor possibly Once a month but a farmer you need least 3 times a day.”